My PRE and Me - Part One 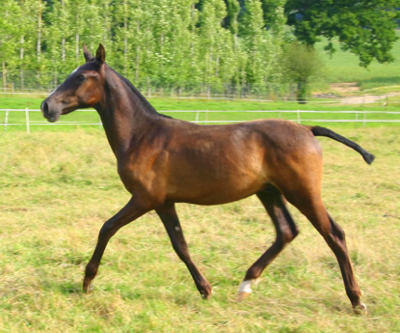 In this three part blog, regular Dressage Anywhere competitor, Marianne shares some of the highs and lows of owning youngsters and getting them competition ready.

The first dressage test you do on your young horse is always nerve-wracking. You finally get the chance to show off all your hard work, often years of arguing, cajoling and battling with your youngster to persuade them that dressage is awesome and that they really want to do it. The first test I did on Enif was beyond nerve wracking. It was terrifying. This test was more than a score and comments from the judge, it was 3 years of unanswered questions, x-rays, tears, speculation, love and his whole life, condensed into 3 and a half minutes.

Just before I was made redundant in 2011, our team were discussing what we would do with our redundancy money. All my colleagues were being so sensible, but there was only one thing I really wanted, a Super Dressage Horse and it had to be a PRE (Pura Raza Espanola), I had always wanted an Iberian horse ever since I was five. I love the way they look and how clever they are and who wouldn't want to learn how to do a Spanish Walk?

I was reading a copy of Horse and Rider magazine, there was an article about a stud called Star Andalusians not too far from me, I'll just have a look at the website, I thought. As any horse lover knows, looking leads to seeing, which leads to buying. Oops. I was now the proud owner of a six-month old Grullo PRE colt. I had never even touched a foal, let alone done anything with one, though I was secure in the support around me. I read books by Michael Pearce and Kelly Marks about the best way to bring up a youngster and was surrounded by books on the breed. My yard owner George assured me that I was doing the right thing and as long as he was handled properly and had the correct training it would all be fine. As she is the Queen of Positive Mental Attitude, I went with that as a green light. Two months later, Enif arrived!

Enif settled into yard life very quickly, we buddied him up with an older horse, Jack for the first few months. I had rather hoped my other horse, Kalief, would be his friend, but he hated him on sight and seemed rather jealous of this ridiculous looking little upstart, glaring at him with every given opportunity. Every day I was at the yard, Enif and I would hang out learning about each other and I taught him to tie up, pick up feet and walk nicely next to me. It was quite a learning curve for us both but we muddled through and quickly his cheeky, sweet personality won everyone over. I was utterly hooked and felt very proud of my clever little Spaniard and myself.

Enif proved to be a typical boy, even though he was gelded at 10 months, he loved nothing more than lying down in his stable, snoring and trumping away, he was the windiest horse I had ever come across! He was also smart and quickly learnt to duck under the electric fencing if something took his fancy on the other side. Personally, I am sure his field mates egged him on for a bit of a laugh!

I did lots of groundwork with Enif; I was determined to have a well-mannered polite horse. I was lucky that my other horse was very good on the ground and I wanted this to continue with Enif. We rarely had any arguments, but he could be spectacularly stubborn, a typical PRE!!

In June 2012 I got a phone call from the Head Groom, Kate, saying that it looked like Enif had been kicked near his left knee. I can't say I was overly surprised, he was 'spirited' and loved winding the older boys up and getting himself into all sorts of trouble - he'd already cost me a few fence posts, handles and several bottles of wine!

The vet was called after a few days of cold hosing but there was no improvement and Liphook sent Eamon to come and treat him. The news wasn't that good. It wasn't a kick but he wasn't sure what the problem was so he needed x-rays, Eamon told me that he would do some research and let me know what he found. The x-rays were sent to several top Equine vets and over to Spain as well, they came to the conclusion that it was epiphysitis - a swelling of the growth plates in his knee, Unfortunately, there hasn't been a great deal of research on epiphysitis so we were very much in the dark as far as treatment, the near future and the longer term. For the meantime, Enif had to go on Dreaded Box Rest. I am not going to lie when I say I was devastated. I honestly felt that this was the type of thing that could only happen to me. I could only do my best with the situation, suck it up and cross fingers that it would turn out ok.

I quickly discovered that putting a yearling on box rest is the equivalent to keeping an active toddler in a cot, all day and all night. It was a nightmare. Enif had a treat ball, which was his most favourite thing in the world but it didn't take him long to work out how to open it and get the nuts out. I bought three of them and they often barely lasted a week, even putting Gaffa tape over both the hole and the lid was useless, he was just too clever! He had swedes, they were used as weapons to throw at the nearest person, I hid carrots in his haynet, he just destroyed the haynet to get to them, I even resorted to scattering sugar free polos in his bed and hiding them in there for him to find, which resulted in his bed ending up all over the place.

A few months down the line, I was told that Enif could go out into the field, albeit on his own and under slight sedation. I felt that we were on the way out of this. Eamon had recommended that he was shod with lateral extensions on both fronts, as his left fore had slightly bowed from the growth plates growing too fast, he placed his hoof onto the ground outside first and it had worn away. The lateral extensions should help with his balance, and help the hoof regrow where it had worn away. Eamon and my farrier, Steve, had a long chat about how his front hooves should be managed going forwards. It was all looking fairly positive!