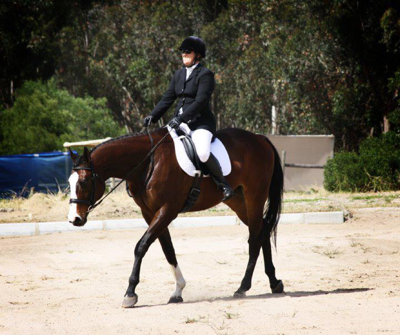 Have you seen Calm Mix from The Herbal Horse, our Medium Championship class sponsor? Read about Jet, a horse that became a handful and put his rider in some scary situations.

Mega Jet is an 8 year old TB by Jet Master out of a West Man mare (Jollijo) who stands at 16.3hh. I got him off the track in Sept two years ago as a six year old. He is a very athletic horse who has challenged me from the day he arrived.

Although he is not a hot and fizzy horse he can be quite a handful. Last year I had problems hacking him out, even in company. He was unbelievably spooky and his flight instinct is VERY strong. He would spook and spin and then try to take off and run straight through the bit. He would shut down completely in these instances and become a danger to both himself and his rider. He has taken me backwards through a barbed wire fence, into a ditch, into the orchards (very dense trees with lots of sharp edges which cut and hurt). He was unaware of what he was going into or through as he was 'running away from a scary object'. I did a lot of confidence work with him, and re-schooled him so that he no longer shut down but he was still unbelievably spooky. When he spooked he would slam on anchors and drop a shoulder, then levitate into the most amazing pig root and then leap forward bucking for a stride or two and then come back to you or he would spin and leap off in the opposite direction for a stride or two and then stop. None of this was with the intent of removing the rider, that was just how he spooked. He was also terrible to canter in company, he would try to bomb off, and if you held him back he would raise his head, hollow completely and get very upright stiff movement and then try to just fly leap.

When he was in light work following an injury earlier this year he started to pig root on the lunge, and in hand when being led both to and from his paddock due to excitement. As he was coming back into work he realised that he could pig root under saddle on the way out on a hack because it was fun and he was excited. It was at this time that we had a nightmare experience that made me consider selling Jet as I was not sure I would be confident enough to hack him out. This was due to an encounter we had while out in company. We met a miniature which caused Jet's companion to spin and head for home at high speed while Jet chose the option of a high speed reverse up a brick pave driveway while pig rooting and pronking all the way. I must confess that it left me very shaken as one mis-step could have cause serious injury for both Jet and I.

It was shortly after this that someone mentioned the calm mix. It was also recommended that I put him on the digestion mix as well (which I have done).

The change in Jet was immediately noticeable. He is much calmer while eating and being handled in the stable. And he hacks out beautifully in company. He is still spooky but he will see something and give it the hairy eyeball while snorting and trying to give it a wide berth. He is calm and alert and responsive when hacking which allows me to really work him correctly forward with confidence. We canter and even have small sprints and little races while out with others. We love every moment of these rides.

And to add the little cherry on the top we went for our first ride out by ourselves last week and I was so impressed with him. Although he was tense and he did call and buck once on the way out he was super when I got him working. Once I got him working he stopped the calling, he was very aware of his surrounds and he was tense but I never felt once that he would 'explode' or become dangerous. On the way home, after he had worked, he finally relaxed and I walked him on a loose rein. Something that I had thought we would not ever achieve out by ourselves.

I am more than happy to recommend this for people who have spooky horses. It did not stop Jet from noticing his surrounds, but it has made his reaction to an item he finds scary controllable.

I am so impressed with the calm mix. I am sure that is what has made such a difference to my horse. He is a pleasure without being a pushover. He has kept his spark but lost the scary edge to it.

Calm Mix is available from The Herbal Horse and you can get 15% off by using the code DRESSAGEANYWHERE at the checkout.