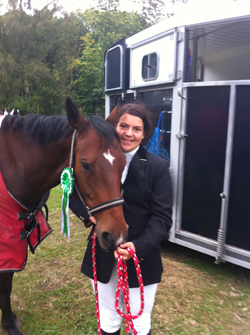 Scarlet, aged 13 is very much into dressage. Doing brilliantly with a 14.2hh New Forest loan pony they were placed in most prelim classes they entered. She then decided to buy Monty (Moonlit Wildfire), a 15.2 ISH who really was a bit of a project. Inexperienced and unbalanced in the canter he was a bit more than Scarlet had bargained for. 'We’ve had to start again', says Jacqui, Scarlet's Mum, 'and Dressage Anywhere has been brilliant because its given Scarlet the confidence to try tests out and get marked by BD judges. This has then given her the confidence to start going out to compete again. Her dream is to be a BYRD and she hopes Monty will help her get there, but its going to be a long journey as we have a way to go, but bless her she’s persevering and is very determined!'

Dressage Anywhere offers a special class just for Pony Club members riding Pony Club tests, so if you're stuck for things to do in the Easter break why not take a look at Class 10 and have a go!